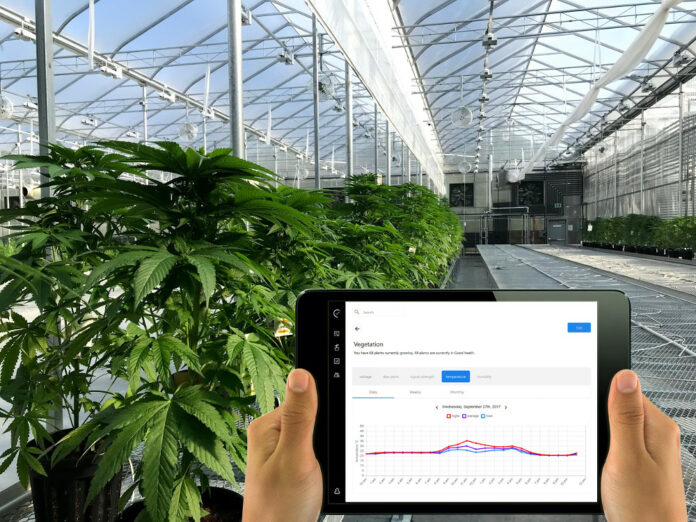 “That’s a perfect analogy,” said CEO Amar Singh. “Now that things are legal, there’s not a whole suite of competition out there that’s been trying to build the best software for cannabis cultivation. We’re at the dawn of a new era, and the technology that goes along with that.”

“We want to be the tool that’s in the day-to-day grower’s hand.”

The B.C.-based company is right now providing what Singh describes as “the best user experience in inventory and quality compliance management according to Health Canada regulations.”

“We’re the only tool for automatically compiling digital and complete production batch records for Health Canada inspections,” he explained.

Singh said at the dawn of legalization last October, some companies found themselves scrambling, and needing employees to spend several days compiling reports to fulfill the requirements of the federal government’s inspections.

With the software it’s now as simple as the click of a button.

Elevated Signals’ program allows clients to track their inventory and quality records in a digital format, saving time and labour, reducing the risk of losing their license.

And, through the wireless environmental monitoring, reducing the risk of crop loss.

“So having light sensors to know if the lights are on at the right time. And the same with temperatures, even something as small as someone leaving a door open,” Singh said. “So real-time risk management, and peace of mind.”

To understand how Elevated Signals was born, we need to go back a few years to when Singh was part of a state-of-the-art greenhouse project called  the Biotron Experimental Climate Change Research Centre,” done in partnership between Western University, the University of Guelph, and Agriculture Canada.

“We built controlled environments chambers and air-locked greenhouses to study the impact of climate change,” he explained. “We could tweak conditions to see if in 20 years, with warmer climates, will crops still grow and, if not, can we adapt? A lot of that technology has now been adopted by the cannabis industry – highly controlled environments to grow the perfect crop.”

But, funding was scarce. After building the Biotron with $30 million it was tough to get more money to continue on to the next goal of the research team, which was to build an autonomous robotic greenhouse.

Singh then returned to grad school in 2016 at the University of British Columbia, focusing on water engineering and business.

He was looking for a project during this term. His parents stumbled across a newspaper clipping about Tantalus Labs and a greenhouse the company wanted to build in a residential area.

As a water engineer, Singh saw an opportunity.

After speaking with Tantalus founder Dan Sutton, Singh learned they were trying to build the “greenest greenhouse around” but also wanted to capture rainwater to address concerns of the public.

“I was interested in tracking water, energy and waste. The footprint of cannabis is huge, and we need to learn how to address that,” he explained. “But Dan told me the issue right now is record keeping, better inventory tracking and all the productivity and data tools you need to run a modern agricultural business.”

“Everyone was doing things on paper, spreadsheets and white boards. Most still are today. That barely works for small facilities, not to mention mega facilities. It does not scale well.”

With the help of an accelerator program at UBC, the infancy of Elevated Signals had begun. After a need was recognized for this software, Singh talked to 50 producers in Canada and the U.S., to see if this problem existed on a large scale.

“We grinded it out for a year and a half before we eventually got funded,” he said. “We’re all very passionate about the environment and the future of agriculture.”

They then found themselves accepted into Creative Destruction Lab, “the hardest tech accelerator in the world” which included a gruelling nine-month process that Singh described as ‘almost like Shark Tank.”

“We made it all the way through and we got some of the most successful investors in Vancouver behind us.”

That was last summer, which was when they began fundraising. While the team initially set out to raise a minimum of $500,000, they pretty quickly got to $1 million then oversubscribed to $1.2 million. “Filling out the initial million” we received an investment from another cannabis accelerator, Vancouver-based Grow Tech Labs (GTL).

“Their technology helps streamline quality monitoring and audit reporting, a major pain point in the industry that needs to be quickly rectified in order to ensure a safe and consistent supply of cannabis,” said Barinder Rasode, CEO of GTL. “We were happy to contribute to their growth and expedite their methods into the market.”

“We wrapped up our beta towards the end of last year… and now we’ve shifted to full operational mode where customers are using our platform to the full extent.”

Amar from @ElevatedSignals was featured on @CannMedColl's podcast! ES is the first company to join the Grow Tech family! Give the interview a listen – https://t.co/8kHxLwdEPx

As the company looks further down the road, it envisions companies fine-tuning the perfect cannabis “recipes” with the help of the software.

“The master growers have everything in their heads, historically. Now it’s about getting that off of a paper or spreadsheet,” said Singh. “What we’re providing is this ability to put that in a sophisticated, easy-to-use data science platform: To have a record of how you’ve grown a crop, to find the best nutrient recipe, the best environmental settings, it all becomes pre-programmed so everyone on the team knows how to execute.”

And, it will provide an opportunity to “tweak” recipes.

“Perhaps that’s dropping a temperature, or adding a nutrient, to see if we get a good result. For the owners, that’s their corporate knowledge base, their intellectual property.”

For now, Elevated Signals is focusing on B.C., having landed major clients such as Tantalus Labs, Anandia, and BlissCo.

“We want to see the industry thrive right here and right now,” said Singh. “But eventually, we can go across Canada and even international markets, because they’re all really looking at Health Canada regulations as the gold standard.”

We are proud to have become alumni of @creativedlab, arguably the top seed-stage program in the world for massively scalable, science-based companies. A testament to the team we have focused on building the future of #cannabis cultivation management tech. https://t.co/RIaUMMMJ9t