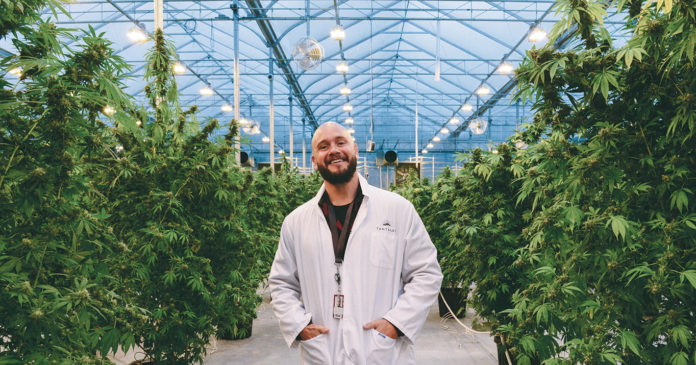 When it was announced in early 2017 that Canada would legalize recreational marijuana by summer 2018, there was bedlam in B.C. as investors, entrepreneurs and basement imbibers alike celebrated the second coming of cannabis and praised the passing of the prohibition. But through all the excitement and hype there was Tantalus Labs, a company that was already sitting on its own medical marijuana goldmine. However, this mine wasn’t underground—precisely the opposite, in fact, because the core philosophy at Tantalus Labs is “the future is sungrown.”

Sutton calls it the ﬁrst of its kind, a culmination of four years of design and construction that leverages the brilliant minds of British Columbian scientists, engineers and agriculturists. He’s banking on it revolutionizing the way Canada grows commercial marijuana.

And the concept behind SunLab is simple: grow marijuana the way nature intended it to be grown—with sunlight. (One of SunLab’s mantras is, “You wouldn’t grow tomatoes in a closet, would you?”) The Maple Ridge facility features full-spectrum sunlight and an automated irrigation system that uses recycled rainwater from a 5.3-million-litre storage system that is then ﬁltered and drip-fed into each plant. A ﬁltration system cycles fresh air every seven minutes to keep mould and pests at bay.

“We have one of the strongest greenhouse industries in this continent,” says Sutton. “The Fraser Valley is an ideal place to cultivate a variety of different crops, and the study of plant growth is thriving at places like UBC and Simon Fraser.” 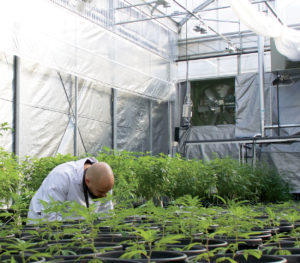 At SunLab’s core is sustainability, which, says Sutton, hasn’t been present in an industry that has been underground for most of its existence. Indoor cannabis growers currently consume about one percent of North America’s energy, Sutton notes, and it’s an unnecessary waste of resources. The team at Tantalus believes that, thanks to advances in agricultural science and a strong stable of engineers and scientists, SunLab can reduce the electricity footprint by up to 90 percent compared to traditional indoor cannabis cultivation.

Sutton has an educational background in economics and has always had an entrepreneurial spirit. After graduating from the University of Victoria, he began working in post-market energy entrepreneurship in his early 20s. A born and bred B.C. boy, Sutton says that marijuana culture has been part of his life since his teenage years.

His “aha” moment came a few years back, as he was looking at medical marijuana grow operations. According to Stats Canada, at their apex there were 91 cannabis producers that had been licensed by the Canadian government. Sutton was bewildered that this was how we grew marijuana in the name of quality assurance. To him, a concentration on higher production environments like greenhouses seemed like the only logical way forward.

“My early advisors and I realized that there was a substantial intersection of both economic self-interest in terms of production costs, and also sustainability and conservationism, which as a British Columbian is a core part of my heritage,” says Sutton.

But the growing operation isn’t the only thing that makes SunLab unique in its ﬁeld—it’s also the parent company’s detailed attention to the numbers. “SunLab is obsessed with data collection,” Sutton explains. “We’ve got off-theshelf and custom-designed sensors that are taking real-time data on 30 different environmental parameters that affect plant growth.”

According to Sutton, the technology that the SunLab team is privy to allows them to study potency productivity at a granular level. Until now, Sutton says, the study of this plant in any dataﬁed way has been limited because of the underground nature of the plant.

Inspired by the likes of Elon Musk and Jim Collins, Sutton says 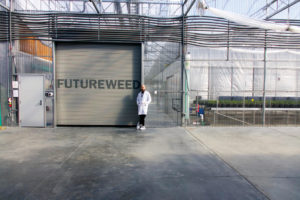 sustainability and forward thinking have always been key values of the company, and something that Tantalus has worn on its sleeve from the beginning. He’s a strong believer that if cannabis is going to truly become legitimate, the industry must embrace environmental stewardship. “It’s widely become accepted that the future of cannabis cultivation in terms of industrial scale is going to happen in greenhouses, and I believe very strongly that Tantalus’ voice was a critical part in that conversation.”

At its present state, SunLab can produce thousands of kilograms of marijuana annually. Currently, it has eight different strains of marijuana in production that are focused on three different categories of product: a high CBD (cannabidiol) product that is said to have signiﬁcant medical beneﬁts without making the user feel “stoned”; a high THC (tetrahydrocannabinol) product that has heavy doses of psychoactivity and is also North America’s most popular; and a one-to-one-ratio CBD/THC product that balances the best of both worlds. Quality is assured on all levels through the ACMPR (Access to Cannabis for Medical Purposes Regulation) and SunLab itself deﬁnes quality metrics by bud size, plant health, smell, colouration and structure. Sutton is reserved when it comes to talking about his ﬁrst harvest, saying he’d rather wait for the customers’ feedback, but adds that they have some “very, very exciting stuff going on.” 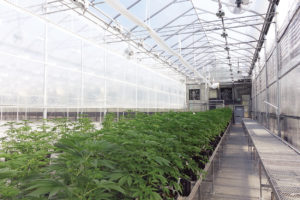 For now, SunLab is focused speciﬁcally on medical marijuana, but with recreational legalization on its way, it will likely look to expand its market in the future, with a 45,000-squarefoot facility expansion planned over the next few years.

“It’s safe to say that everybody on our team is in it for the long haul and is deeply committed to sungrown cultivation,” Sutton says. “There’s amazing potential for greenhouses to revolutionize this industry.”