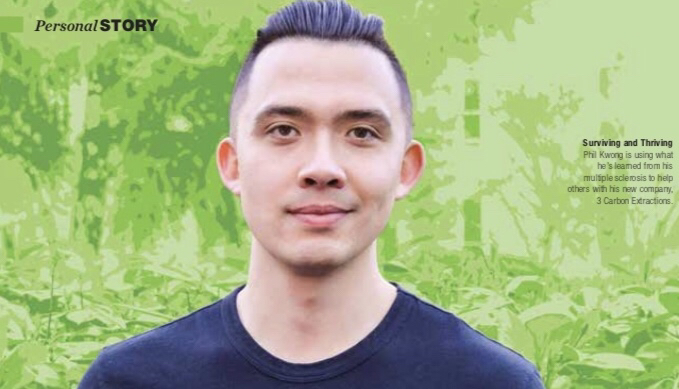 I was around 23 when I first got diagnosed with MS.

I woke up one morning and I couldn’t see anything out of my right eye except a blur of colour.

I showered, went to work and tried to focus, but then the numbness hit and I figured I should go see a doctor.

It’s strange, getting passed from doctor to doctor. They’re all telling you the same thing, but different things.

You see, there’s no cure for MS.

Each doctor’s guess is as good as the next.

Each medication tries to reduce lesions that lead to something we call relapsing (losing your vision, arm goes numb, you get the idea). I was told to go on a huge dose of this steroid to avoid going blind.

If someone tells you something like that, you just kind of do it. But the side effects were what really started me looking into alternative treatments.

Insomnia, paranoia, you don’t eat but you gain weight. Taking large doses of steroids is hard on your body. It got to the point that I couldn’t even live on my own anymore; I had to move in with my parents.

Being young and self-righteous, I actually ended up going cold turkey on the treatment altogether, until I relapsed again.

Then, I took things into my own hands and went down to the Mayo Clinic in Arizona, where I learned far more than I had been learning from doctors in Vancouver.

After that, I was still kind of butting heads with the specialists in Vancouver.

I don’t remember where, but I read somewhere that cannabis could be beneficial for guys with MS.

Montel Williams (you know, the talk show host?) had been diagnosed with MS and was taking pharmaceutical drugs to hold off the relapses, but he was also taking cannabis to manage the symptoms of the drugs.

From there, I started using cannabis for symptom relief.

There’s absolutely no proof that cannabis can stop MS or even slow the progression, but from an anecdotal level, I would say cannabis can help with side effects caused by pharmaceuticals.

I’ve actually always used cannabis, but I had never thought about using it medicinally before.

When all this happened, I went into a dispensary—a pretty well-known one in Vancouver, actually—and told the bud tender I had MS.

He started telling me about this strain that was “super dank” and I was like, “What the fuck is wrong with you?” I’m asking questions like, “What’s in it? How’s it made? What’s the residual?” and he’s like, “Bro, don’t worry, it’s super dank.”

When you think about it, at the time, in terms of the sophistication of the dispensaries, there was no training, no cannabis representatives, no groups trying to educate people.

At that time, it was more of a lifestyle thing.

To be honest, now that I think about it, a bud tender should never be put in the position of having someone walk in and say, “Oh, I have Parkinson’s,” or “I have MS.” I don’t think people at dispensaries signed up to work with people who are dying.

I was actually kicked out of that dispensary and banned for asking too many questions.

People felt threatened and made irrational decisions, but I don’t hold any grudges. A lot of those places have changed their ways and educated themselves; it’s a progression of change.

Health Canada actually had a list of cannabis places on their website, and I ended up calling one of them that was based on Vancouver Island.

They were able to recommend a contact to me who could speak to the varying amounts of THC and CBD. That was when I started experimenting with different strains and oils.

Those discussions led me to Haley’s Comet, a strain using equal proportions of THC to CBD that was made for a girl who had epilepsy.

There’s far more research for the effects of cannabis on epilepsy than there is for MS. I was experimenting with different doses, trying to work out what benefited me and taking notes on my behaviour that day. I definitely felt that using the correct levels of cannabis, which, for me, was a ratio of four-to-one THC to CBD, levelled me out.

Instead of constantly creating that four-to-one cocktail, I created a hash oil product that I could bring to the market.

The oil I created works for me, and, as it turned out, a lot of other patients started reaching out to say it worked for them, too.

I turned my MS into my career.

After that, I launched a new company then sold 50 percent of it to a pharmaceutical research company out at UBC.

I started a new pharmaceutical drug this year, but until I get an MRI I won’t know if it’s working or not.

When I step back and look at everything, most of the disagreements I’ve had with the MS clinic were because they kept telling me there’s no scientific proof that cannabis will help your MS.

My return argument was, and still is, that there’s nothing that says your drugs will definitively cure my MS either, so what’s the difference?

At the end of the day, I know cannabis helps me with the side effects of pharmaceuticals, and that’s enough.

Phil Kwong is using what he’s learned from his multiple sclerosis to help others with his new company, 3 Carbon Extractions.