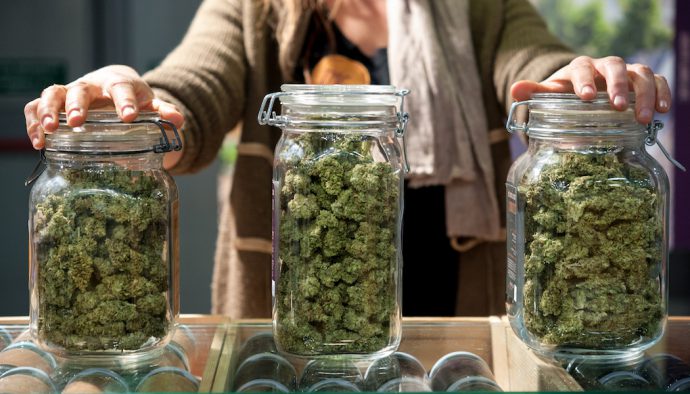 Canada’s largest cannabis producers are being credited with micro-booms in some local economies, and the trickle-down effects are visible in nearby housing sales and price increases, according to RE/MAX .

The realty company released the results of its 2019 Cannabis Survey days before the second wave of legalization on Oct. 17, 2019, which also marks one year since Canada legalized recreational cannabis.

RE/MAX notes the “trickle-down” trend is more pronounced in Eastern Canada, where there’s a greater number of large-scale cannabis producers.

Smiths Falls, Ontario is one such market transformed by Canopy Growth, the largest cannabis producer in the world. After taking over the abandoned Hershey factory, the Ottawa-area production facility now employs 1,300 people and has a market value of more than $11 billion.

“The economy in the Rideau-St. Lawrence area is experiencing a boom, which is triggering home sales, which rose by 27.1 per cent year-over-year, and average prices increased 10.5 per cent. Demand is up and there’s a housing shortage in the region. We expect to see similar cannabis industry-related growth in other regions as well.”

RE/MAX says some markets to watch include Windsor-Essex, where Aphria has set up shop in nearby Leamington, Ontario and employs 1,000 people. The region saw September 2019 home sales increase 7.82 per cent and average prices rose 9.10 per cent year-over-year.

In Atlantic Canada, the area surrounding Wentworth, Nova Scotia will be of interest, where Breathing Green Solutions is in operation.

Similarly, Atholville, New Brunswick is also experiencing a renaissance thanks to Zenabis Global Inc., employing more than 420 people from the town and neighbouring communities.

“The legal cannabis industry is already being credited with invigorating some lagging economies and as a result, those housing markets could soon see a flurry of activity,” Alexander adds.

While Eastern Canada appears to be a “hot spot” for cannabis producers, and Western Canada has some large-scale facilities, the west is seeing a much heavier influx of cannabis retailers compared to Ontario and Atlantic Canada.

Calgary alone has more than 50 retail locations and Greater Vancouver has 23, whereas Toronto has only six. None of these markets have seen a meaningful impact on real estate activity or values, RE/MAX observes.

This is despite the results of a RE/MAX consumer survey, which found that 65 per cent of Canadians would not like to live near cannabis retail stores.

“It appears that there were a lot of anticipated reservations surrounding cannabis retail and the negative impacts on local property values that did not come to pass. We have not seen a decrease in home sales or prices that can be attributed to legal cannabis,” says Alexander. “In fact, the opposite may be true. As the retail footprint grows and diversifies into edibles and other formats, buyers and sellers may start to feel less resigned.”

RE/MAX’s survey found that two in 10 Canadians (21 per cent) already live in proximity to one and most of them (72 per cent) say living near one is not a factor in their decision to move.

“The presence of more stores may influence how home buyers approach certain neighbourhoods. Even with changed attitudes, however, the idea of NIMBYism still looms in the background,” adds Ash. “But for the time being, acceptance and adoption seems to have been pretty positive. The market is expected to expand even further with the legalization of topicals and edibles in December of this year, which could pave the avenue for even greater growth of the industries associated with legal cannabis. There’s clearly an appetite for it.”