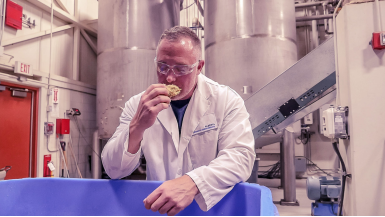 The product aims to be a ‘delicious, less harmful alternative to barley-brewed alcoholic beers’

The world’s first fermented cannabis beverage may become a reality next year.

Province Brands of Canada announced this week that its co-located subsidiary, Evolved Canna-Innovation Labs, has received its research and development license from Health Canada.

According to a release, the license will be used to continue “ongoing R&D into creating valuable intellectual property, enabling the worlds’ first fermented beverages brewed from the cannabis plant” which “moves Province Brands one step closer toward a 2020 Canadian retail product launch for their versatile portfolio of premium and super premium adult cannabis beverages.”

The company says these beverages will be unlike any others on the market, using only four ingredients – cannabis, yeast, hops and water – to produce a “delicious, less harmful alternative to barley-brewed alcoholic beers.”

“This is one small step for Province Brands and one giant leap forward for a world in need of a less harmful alternative to alcohol,” said Dooma Wendschuh, Co-Founder and Chief Executive Officer. “Health Canada’s licensing allows final-stage development of some of Province Brands’ technologies and early-stage development of others. The license not only allows our research team to work together under the same roof, it will meaningfully accelerate delivery of high-quality, authentic fermented beverages brewed from cannabis, and for our mission of creating alcohol alternatives.”

Province Brands says it is the only known company exclusively focused on brewed or fermented beverages to receive Health Canada’s cannabis research greenlight. It has invested more than $10 million in direct R&D costs and has assembled a team of globally renowned bioprocess chemists, bioprocess engineers, pharmacologists and cannabinoid researchers to “develop premium cannabis beverages crafted in an entirely new brewing tradition.”

“The patent-pending technology enabling this new tradition helps Province Brands avoid many of the problems and pitfalls commonly found in cannabis-infused beverages and helps bring the company closer to its goal of creating a less harmful alternative that can be used in all the same social and leisure settings as alcohol,” a release notes.

With the newly granted research license, Province Brands will focus on increasing the carryover of cannabinoids from the plant matter into the company’s final products and “continue development of technologies aimed at creating a beverage with a dose/response curve similar to that of alcohol.”

Additionally, the company will develop protocols for cell-based research to advance its understanding of the phytocannabinoid pharmacology for future product developments.

The announcement comes ahead of the expected October 17, 2019 Canadian legalization of cannabis edibles and beverages.