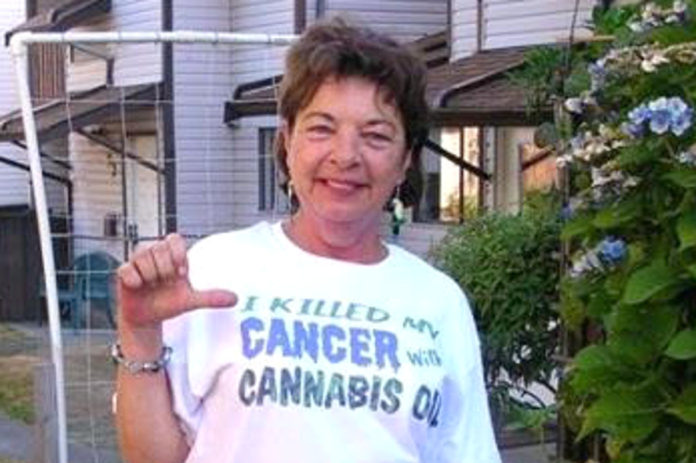 The doctor told her she had a “death wish” and that she was going to die when she refused radiation. Instead, Yelland made and started taking cannabis oil and waited a year to go back to doctor – at which time she was deemed cancer free. Subsequent biopsies confirmed no traces of cancer.

Yelland said to herself that if this worked, she would spend the rest of her life telling people about this, which is what she does. She receives thousands of emails and speaks with hundreds of people a week from around the world. Some she has helped were as young as two months old and the eldest was 86.

Yelland is speaking at the upcoming Cannabis Hemp Conference & Expo, set for Sept 28 to 30 in Vancouver.

You began making and taking cannabis oil. What made you delve into it?

“My quality of life at that point was horrible. I was severely compromised. I was like this little old lady living on every kind of painkiller you can possibly imagine…. I’d sit on my patio at night, rocking, wishing the pain would go away. This was my life. The idea of trying to fight cancer on top of this, was crazy.

“My sister sent me a video link from Run for the Cure. I watched the first 10 minutes and proceeded to watch the entire video. I watched it again. Then I phoned a friend of mine who is an internationally known physician in Italy, and he said ‘Oh Corrie, we’ve been using cannabinoids with cancer for years here.’ I did nothing but research for two weeks, day in and day out, and I was stunned by the sheer volume of studies out there on cannabis and cancer. I thought to myself, this is my only hope. I thought even if it just holds it at bay. I went to my doctor, and I had two GPs, and they shared an office so I got the woman. She told me that they don’t believe in cannabis. So I didn’t know how I was going to get it. Then I found a dispensary where as long as you had proof, and I did, they would accept you.

“I signed up and got accepted, which was a relief. This was a whole new world for me I was like Alice in Wonderland. I walked up and said I’d like to buy some cannabis oil, and they said they didn’t have it. I remember this feeling of sheer desperation and fear. I actually went online, there were no Facebook groups about this at the time, just me myself and I, and the Run for the Cure video, so I made it. I got instructions off the website, I had three or four people with me, we had written instructions. I think we got an ounce or maybe two ounces the first time and made the oil and started taking it.

“It said you had to do 60 grams in 90 days and had to work up to a gram a day. I was on disability and friends would chip in money. I’d get an ounce or two to make oil. I did not get up to taking a gram a day or 60 grams in 90 days, so I was convinced it wasn’t gone. I didn’t expect it to be gone. The most I was hoping for was it was staying the same and not getting worse.”

What was the difference you saw immediately?

“The first time I did it I had a friend stay with me for nine hours. I started taking it and at the time, I was on 10 to 15 T3s a day, dilaudid, opioids, morphine, sleeping pills. In 10 days I went from being on all that to half a Tylenol 3. I had no idea, and hadn’t even considered the cannabis oil would help with that, I was all about killing my cancer.

“It was interesting because some of my friends were very positive, some were kind of on the fence, some were dead set against this. But even those who were against it would say, ‘Wow you look great. Even your complexion looks different.’ I was like this little old lady and all the sudden I was back and alive.

“This November will mark six years I am confirmed cancer-free.”

What were the doctors’ reactions when you returned to them, cancer free?

“I remember, the doctor wrote in a report to my GP that had he not known I had cancer, he wouldn’t have believed it. Nothing. Not even scar tissue. He took me into the OR to do a biopsy. The biopsy came back, and no malignancy not even any dysplasia. Completely and utterly gone. I remember he walked back to the room, had a paper in his hand, he’s looking at me, he said, ‘You did it. You did it. You’re completely cancer free.'”

“My other GP, the male, when I tried to tell him what I was doing before I started, he literally covered his years. He did not want to hear it. I was their shining example of success, overcoming this and this and this. He was stunned when I wasn’t going to do radiation. He said, ‘You’re going to do it,’ and I said, ‘No I’m not.’

“At that time, he told me, ‘Go do your alternative treatment then come back and do radiation.’ But in the end he did a 180.”

Where do you think you would’ve been without cannabis oil?

“I’d be dead, absolutely I’d be dead. No doubt about it. I remember the day that I got the clear and I phoned my son, and I told him that I was cancer free. He said to me, ‘Mom do you remember when I told you I was with you no matter what? Whether you wanted quality of life, or quantity?’ He said, ‘Well when you told me you were going to do cannabis oil,’ he said, ‘OK I’ve got my mom for 6 more months.’ He didn’t think it would work.”

What made you want to share your journey, and the benefits of cannabis oil, with others?

“I had this amazing thing happen yesterday and this is what keeps me going: In February, a woman reached out to me from Australia. She had a 16-year-old son with lymphoma. They’d done chemo, radiation, blood transfusion, stem cell, everything. Nothing worked. He was dying. She was sitting by bed side, nothing they can do. She was frantically Googling alternative treatment. She said, ‘I was looking for a miracle, and your name came up four times in 10 minutes. I think it’s a sign.’ We got him some oil in Australia, but he wasn’t doing great, it’s really hard to source anything decent there. I have this woman here who has a kick ass oil…. I was on Skype with her and said, ‘Let me call just on the off chance she will ship there.’ So I asked, ‘Is there any way you would consider making an exception to your no shipping out of Canada rule?’ She said yes, but when it leaves my hand, it leaves. We got this oil there – it’s made from six strains and I’m more and more convinced it’s about mixing the strains. I had a call yesterday, her and her husband were in the car sobbing their eyes out, he’s cancer free.”

What would you say to the naysayers, who aren’t convinced of the benefits of cannabis oil?

“It’s frustrating. It’s really frustrating. Because those are the same people that will not even step outside the box long enough to read an article, listen to an interview, watch a documentary. They say, ‘I don’t do drugs, I don’t want to get high.’ I say, ‘Well what do you think you’re doing when you do morphine or percocet or fentanyl?

“I love that phrase, I’ve used it on more than one occasion. But it’s very frustrating because these people who won’t listen are the ones who don’t take responsibility for their health… they blindly trust the doctor, you know? I can’t tell you how many people I’ve spoken to who say if only I’d known about this for aunt Mary, my sister Sue, or my father.

“I say to people, show me a disease or condition this doesn’t at least help with. I’ve yet to encounter it. If it doesn’t cure it, it helps with it. I think it would be great if people understand they don’t necessarily need to be high. The youngest person I’ve worked with was two months old, oldest 86. This little baby was two months old, with a tumour around the optic nerve. The baby was blind and they had given him two to three months. By Christmas that child could see and the tumour was gone and that child is now four years old.”

Do you think the legalization of recreational marijuana going to help reduce the stigma surrounding cannabis?

“I don’t know. I don’t know, because the focus with this legalization is on recreational, not on medicinal, I’m actually quite concerned for what’s going to happen for the medical patients out there because of this legalization. I find it all really scary.

“Yes people can use it to relax, but it’s a medicine. It’s a medicine we all need. All this disease is happening because we’re not producing enough cannaboids.

“Will doctors be a little more forthcoming? I think so in one way because they won’t be watching their backs quite as much but on the other hand, I get tons of people who say they’re on the oil and it’s not working. Turns out, they are ordering from places where it’s three per cent or 30 per cent THC and that’s not going to do anything for an aggressive cancer. I think these doctors are in good faith sending patients there, but don’t have a clue what’s needed.

“I actually have doctors sending patients to me now. I had a doctor out of Massachusetts, who sent several people to me. Some doctor in London, England sent a patient to me, as well as a doctor in Australia and one in Calgary. But these doctors need to be educated. Most of these patients going in there and getting cannabis prescriptions, they’re first timers often and they haven’t got the foggiest of an idea.

“Probably 80 per cent of the success stories I’m posting now, are on an oil made from four different strains. We just turned around two pancreatic cancers.”

What keeps you going in your effort to spread education and awareness?

“People need to know they have hope. We lose patients as well, but cannabis oil has an 80 per cent success rate which is pretty darn good. But often when these people come to me, it’s the end of the road – chemo, radiation, their bodies are done, they’re dying. It’s a hail Mary. Those are the ones we lose. But I have to tell you without exception, every single time we’ve lost a patient, the family, the sister, the neighbour, have all said what a difference that oil made. I’ve heard that over and over and over again.”

Yelland has hosted a podcast called Cannabis Health Radio, interviewing patients who have used cannabis to cure or assist in their various health conditions, as well as experts in the field.

Yelland’s answers have been condensed for length.