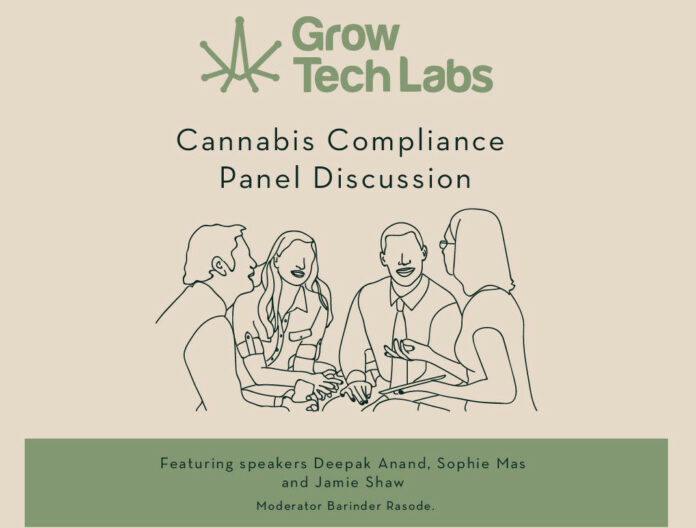 Grow Tech Labs is hosting a May 21 panel discussion on cannabis compliance and licensing.

“We have an amazing panel with our mentors and advisors; Sophie Mas, Deepak Anand and Jamie Shaw. The panel will be moderated by our own Barinder Rasode. There is a wealth of information in this room that you don’t want to miss,” organizers say.

In an interview with BotaniQ Magazine, Anand shared his thoughts on recently announced licensing changes from Health Canada. Effective immediately, Health Canada will require new applicants for licences to cultivate, process or sell cannabis for medical purposes to have a fully built site that meets all the regulatory requirements and criteria at the time of their application. Those with existing applications in the queue will only receive a high-level review, with the detailed review taking place once they have a completed site.

Critics say this is a risky and expensive hurdle for aspiring producers and a blow to the craft cannabis industry.

“Generally I’m not very happy or overly enthusiastic with the changes they’ve come back with, I believe in a more diverse and inclusive industry,” he said, noting while 180 licenses have been granted, there are another 650 in the queue.

“So far we haven’t seen a facility built to that level,” he said. “They’re saying build out the facility and we’ll come and inspect it. Nobody’s going to spend millions of dollars without knowing if Health Canada will approve it.”

While the new rules might benefit those in process or who have already achieved licensing, Anand said “we need to raise the industry as a whole,” noting it does nothing for smaller producers.

“In fact it throws them back,” he said. “We don’t have a single micro-processor or cultivator that was approved under the new regulations.”

Anand pointed to some who are developing a “collective model” or a “co-op.”

“So different producers in the same building, leasing units. I don’t know if that’s actually going to be accepted by Health Canada. At end of day they could say no we’re not happy with that site. They could say, ‘We don’t like that there are neighbours next door, or what it looks like.’”

Asked to comment on the product shortages seen across the country, and if regulations may be playing into them, Anand said “this has been a supply chain issue more than a supply issue.”

“These companies were set up as cultivators, not as packing, supply and distribution companies. So they have done a good job cultivating cannabis but to translate that into labelling and shipping and logistics – and it was only a couple months before legalization when they said here’s what excise stamps look like and you’re going to have to figure out how to glue them onto packaging – so trying to get hundreds of thousands of excise stamps on to boxes has not been an easy process. I know some companies have CEOs stamping these on packages. They had literally a few days to get this underway.”

Looking to the future, Anand said the government needs to “build an industry to allow for more outside help to come in” from other established industries, such as pharma.

“The fact that Health Canada says sorry, we’re going to sit back here wait for you to spend all your money then take a look after it’s done, it de-incentives people to come in. You need to make sure you’re being inclusive to people who bring that expertise. When you get into the logistical challenges of manufacturing edibles or beverages, let’s bring in people who actually have this expertise. You see companies now coming into the space who play close attention to this.”

Anand also predicted that the recent licensing changes will hinder the rollout of the legalization of edibles later this year.

“We know a few LPs have been planning and will be ready with product. But I think this most recent change is probably going to put a damper on new companies that were waiting for regulations we know are going to be out in a few months. I think that will eventually result in a similar challenge – where product is out of stock, and there’s a lot of demand for some really, really good products that weren’t available.”

Overall, Anand said medical patients have been shafted through legalization in a variety of ways, including product availability and costing.

“And I think the new changes are further going to shaft them in a far more significant way,” he remarked. “The fact of the matter is, unfortunately, legalization of recreational cannabis has meant medical cannabis has a back seat.”

“That’s the reality on the ground.”

Do you have questions for Anand, or others on the panel? Grow Tech Labs encourages attendees to send in questions prior to the event at alex@growtechlabs.com.